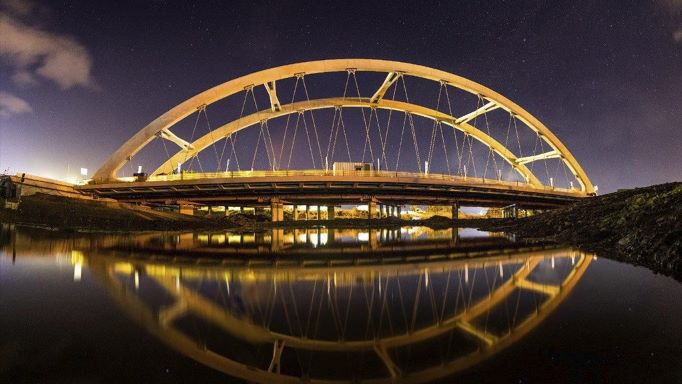 Globally trusted infrastructure consulting firm AECOM, which entered the project on behalf of its client, the Western Cape Government’s Department of Transport and Public Works, Roads Branch, was responsible for all engineering aspects, from road and bridge design to project and construction management. The main contractor was Haw & Inglis Civil Engineering.

“The successful completion of this project clearly shows that innovative design and construction techniques are able to blend structural concrete and steel, using modern structural methodology, into one unified end product with a distinct purpose and aesthetic appeal. It has been a great privilege to be part of this project team and work closely with all involved,” says AECOM Cape Town Bridges Team Lead Abé Newmark. “It has definitely been the most memorable project experience of my 40-year career as a bridge engineer.”

AECOM concrete specialist Philip Ronné, Associate Engineer – Bridge Engineering, cites the success of the bridge due to the management of the interface between bridge engineering and construction materials. Careful attention was paid to the materials selection and structural performance to ensure constructability of the larger concrete elements, while favouring important Environment, Sustainability and Governance (ESG) goals like recycling. In this regard, the old bridge became part of the foundation of the new bridge.

In terms of sustainability, the cementitious system adopted comprised 30% fly ash, which has a much lower embodied carbon content. The specific stone used in the concrete mix was selected carefully. This relates to the structure’s response to the evolution of heat that the concrete experiences as it hardens, which can cause cracking during cooling to an ambient temperature. To counter this, the stone aggregate, with favourable coefficient of thermal expansion property, was selected to minimise such movement. Together with careful binder selection, Ronné came up with a 50 MPa high-strength concrete mix with the required structural performance, long-term durability, and lowest heat signature.

Ronné even spent time at the batching plant during the critical large concrete pours to ensure quality control. “If there is any problem once cast it has to be demolished, so you can imagine the importance of getting it right the first time in terms of time and other considerations,” notes Newmark. During the casting process itself AECOM was able to use its expertise to assist the main contractor, especially regarding the convergence of a high number of post-tensioning anchors, steel reinforcement and hanger anchors at the arch spring points.

Another key consideration was the time-dependent properties of the concrete mix to predict how the structure behaves over its entire lifecycle. Here the first 30 years is the most critical because as the structure deforms continuously over time due to creep and shrinkage, this impacts the structural behaviour. The cable tensioning was calibrated to ensure that behaviour was modelled with sophisticated bridge modelling software.

There were four tensioning phases, with the initial tensioning of the bridge structure taking six to 12 months. Following this process, it was remodelled and tensioned again to ensure the concrete stays in an uncracked condition for at least the next 30 years. Apart from key members Ronné and Heinrich van Wijk, Senior Engineer: Structures, the team also collaborated with AECOM’s complex bridge team in the UK. “I am sure that without their involvement the project would not have been the success it was. For us it was ground-breaking technology. However, the AECOM collaborative model allowed us to tap effortlessly into our global expertise,” says Newmark.

“The other aspect that feeds into the innovation is obviously the transverse launching, a first for Africa,” he notes. To minimise traffic disruption, the new bridge was constructed adjacent to the existing bridge while maintaining traffic over it. Upon completion, the new bridge was then used as a temporary bypass and river crossing while the existing bridge was demolished, and new abutments built. The new tied-arch bridge was launched transversely into its final position in less than 12 hours on 14 August 2021.

“That detailed planning process literally took more than a year to consider, as well as reviewing all the elements involved in close consultation with our UK specialists, the contractor, and temporary works designers. The original push-launch system was changed by the new contractor to a pull-launch system, and the design team had to do a lot of retrofit engineering to the completed temporary substructure. The change of contractor also meant that the client had to accept a lot of temporary works risk managed by AECOM on its behalf, in addition to free issue items like anchor plates and support work. It became our responsibility to drive the delivery of these to not delay the project further. We played many roles during the seven years of the project,” reflects Newmark.

The Fulton Award and Commendation and subsequent recognition by the CCSA is an important acknowledgement of the engineering excellence inherent in the project. “The fact that we ultimately managed to deliver the project even faced with all of these obstacles was a landmark achievement,” cites Newmark. “A project like this reveals that our South African engineers can compete with the best in the world, which is very encouraging.” Following their involvement with New Ashton Arch, several team members have subsequently become involved with other iconic bridge projects locally and internationally.

The prestigious Fulton Awards recognise and honour excellence in the design, use, and innovation in concrete. Originally scheduled for 2021, the awards were postponed to this year due to Covid-19. Winners were announced at a gala function in Johannesburg on 10 June. “Ingenuity, innovation, and the high-quality workmanship of the South African concrete industry were distinctive features of all 24 entries in the 2022 Fulton Awards,” says CCSA CEO Bryan Perrie.

The New Ashton Arch bridge component is, in fact, part of a larger infrastructure project that saw the rehabilitation of 13.4 km of trunk road from Ashton to Montagu via Cogmanskloof that was completed recently. This overall project sets to improve traffic and pedestrian safety and to improve the flood capacity of bridges. The entire project has been entered into the 2022 CESA AON Engineering Excellence Awards, with the winners due to be announced at a gala banquet on Wednesday 28 September.

Despite slow recovery TUHF is optimistic about renewed...