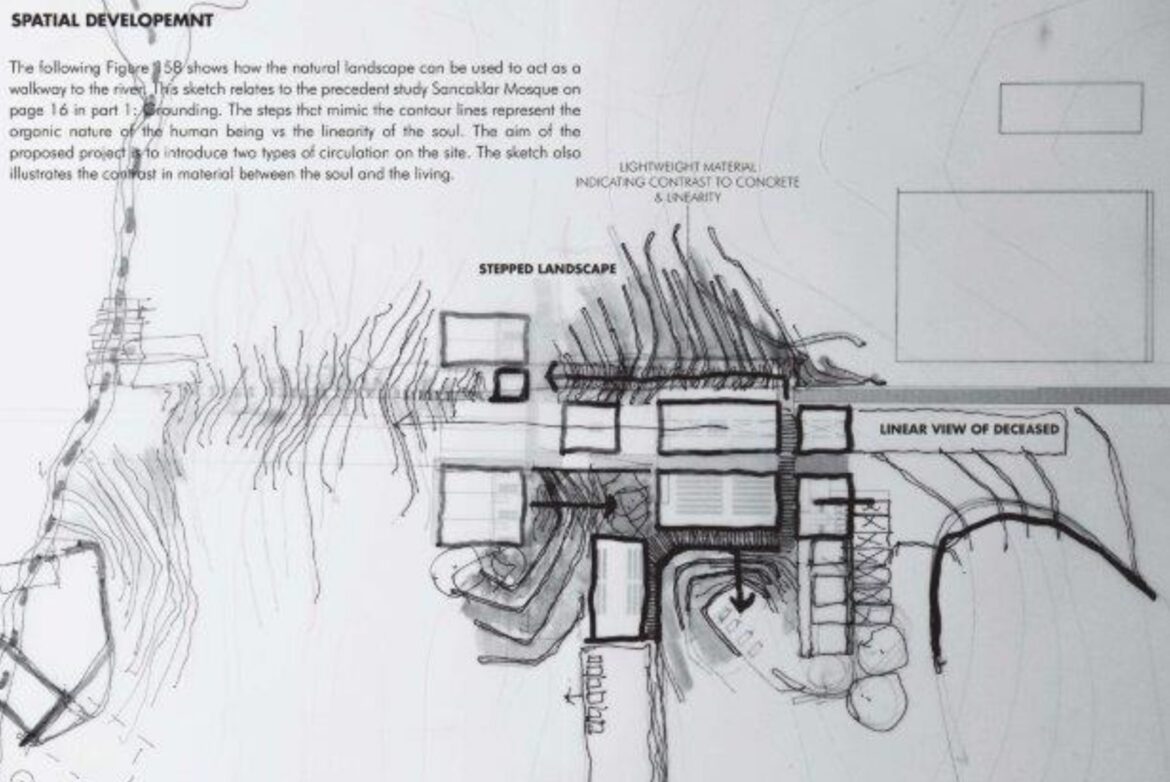 A project exploring the themes of time, cycle and ritual embodied within the Hindu religion in order to influence the creation of a contemporary cremation infrastructure was declared the regional winner from the University of the Free State as part of the 34th Corobrik Architectural Student of the Year Awards. The event was held at the Planetarium on Naval Hill in Bloemfontein on 11 December.

Entitled ‘The Last Sacrifice’, winning student Nicki Vollmer explains that the project is an investigation of the complexity of the Hindu religion and its beliefs towards death and our existence on earth and beyond.

The lack of available burial ground in South Africa emphasises the need for alternative burial methods. Due to Nicki’s personal interest in the Hindu religion, she opted to focus her thesis on Hindu cremation traditions so as to encourage the public to consider cremation as a meaningful and honourable burial method.

Billed as one of the most prestigious awards programmes of its kind in South Africa, the Corobrik Architectural Student of the Year Awards selects regional winners from eight major universities, based on the students’ final theses. These regional winners then go through to the national round, where the top title is awarded, in addition to a R70 000 grand prize.

“I believe that a company like Corobrik encourages students to consider the greater impact that their design would have on real spaces and real people. As a student, one often gets lost in the fictitious aspect of studying architecture, but once the project is acknowledged, one reconsiders how the public would respond as if it was to be built in actuality,” comments Nicki.

“It is truly an honour to have won this award, and I feel privileged to be able to share my project. Competing in the finals allows me to share the complexity and beauty of the Hindu religion and emphasise the current need for alternative burial methods in South Africa.”

Nicki was inspired when she noticed that architecture has the ability to directly influence the way individuals interpret and respond to their surroundings. “It made me realise that design has a greater influence on human behaviour than purely aesthetic values. The greater meaning of architecture is what triggered my initial interest in this field.”

Nicki adds: “My family kept me motivated by showing interest in the project and its process. It is extremely helpful to discuss ideas with fellow students, since they are able to provide alternative solutions. My role models have often been my lecturers and professors at the university. I enjoy adopting various principles and practicing them in my own life.”

A major challenge was changing from the Cape Peninsula University of Technology to Bloemfontein to continue her studies at the University of the Free State. “I believe that the biggest challenge is yet to come as most of us will start at a new architectural firm and have to find our way around a new environment. My biggest opportunity to date has been to travel to new places within South Africa, as well as abroad, and discover new cultures and unique places.”

Nicki’s dream for the future is to focus on architecture that influences public environments as well as religious spaces by furthering her knowledge through both practical and theoretical studies. “I believe that communities grow when they are given the opportunity to congregate and celebrate their beliefs and culture as a group. As an architect, I hope to create spaces that allow communities to express their character and stories.”

Corobrik has long played a pivotal role in recognising up-and-coming young architects in South Africa, notes Marketing Support Manager Thilo Sidambaram, who herself has been involved with the awards for two decades. The Covid-19 pandemic has meant that all regional and national events have had to be held remotely. “Despite the challenges posed, the country’s architectural students have still managed to excel, and Corobrik is proud to continue to support our universities during this difficult period.”

Look out for the National Corobrik Student of the Year Awards ceremony that will take place virtually in May.