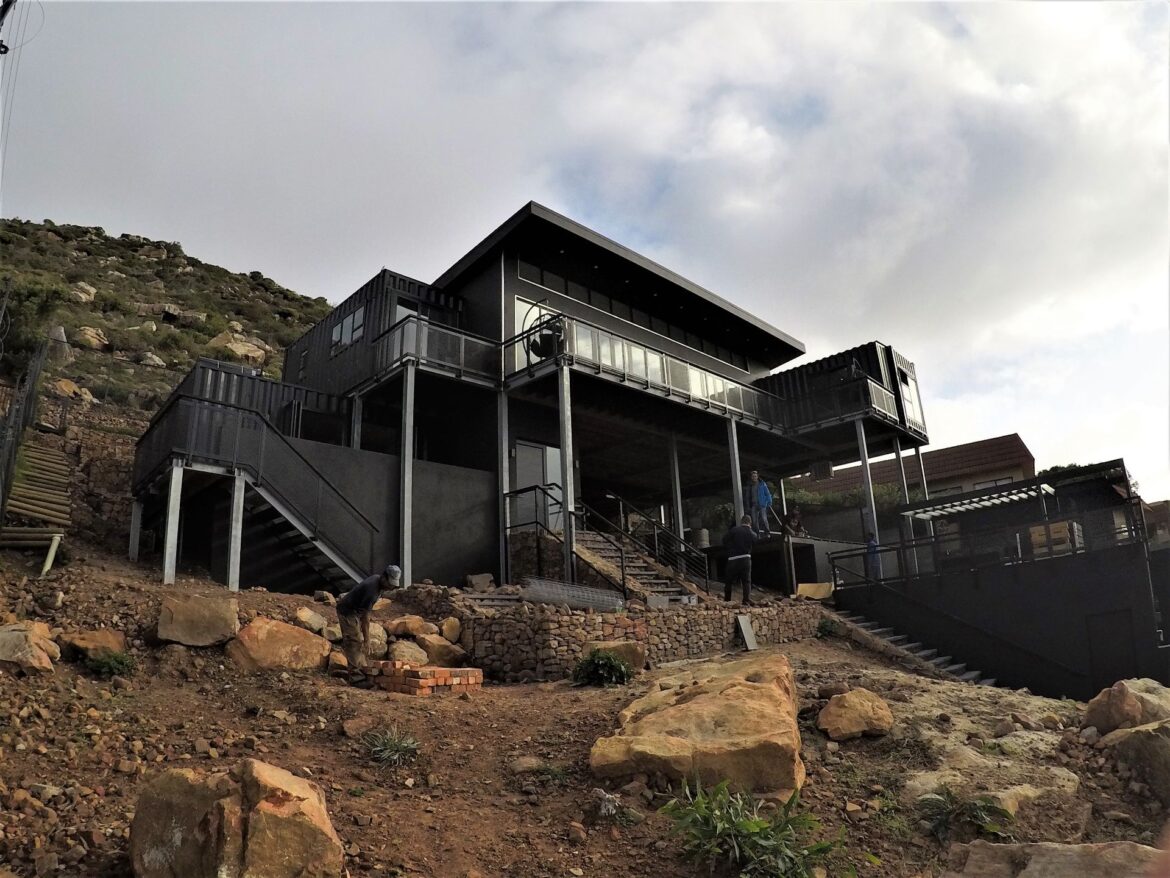 Located on a steep site in Fish Hoek, the client wanted to create a stepped house that would tick all their requirements, which included as many outdoor spaces as possible which could be used depending on the weather. The idea of constructing with containers enabled us to work with the steep site to create stepped terraced indoor and outdoor areas.

On the lowest level of the site is a concrete double garage base with a terrace of steps leading up to the next level of the rooftop sun deck on the garage roof in the front portion of the site. This will have a Jacuzzi and covered bar area for entertaining. The landscaping on this terrace level consists of gabion steps with rocks used from site excavation which will be finished with large rectangular grey concrete pavers. These steps will be surrounded by natural landscaping with native, hardy and waterwise flora. On the next platform above the roof terrace will be a large pool and covered decked area.

The garden steps will also lead to the next level of the house, a small guest cottage with its own kitchenette and living space with one bedroom and bathroom. The bedroom sliding doors lead to a private, sheltered courtyard which is the perfect place on a windy Cape Town day. To the front of the cottage are stacking doors that lead to a semi-enclosed decked area where occupants can enjoy the stunning views.

An enclosed brick structure with a steel staircase then leads up to the next level to the main house. A wine cellar will be installed at a later stage to the underside of the landing. This double volume space filters light into the entrance. As you step off the top landing you are exposed to the main living area. Occupants are greeted with a large open dining and lounge area which is divided by a central fireplace.

Two sets of large stacking doors and clerestory windows which span the length of this space treat occupants and guests to endless views of Fish Hoek valley and beach which can be enjoyed on the fourth open area of the house, a large steel and timber balcony that connects the living area with the main bedroom. Behind the living spaces is a beautiful kitchen which stretches half the length of the 12-metre container, with a small scullery tucked in the corner which has access to the back garden. To the right of the kitchen is a half-enclosed study and home office area which has a sliding door which also leads to the back garden.

All the exterior decks have blackened wooden planks that were charred with fire and sealed to create black decking, which ties into the aesthetics of the whole house which will be predominantly black.

Back inside the house, there is a guest bedroom with bathroom space located to the north-east with its own private balcony. On the north-west side of the living area will be the elongated main bedroom with 90 degree views of Fish Hoek bay, a walk-in dressing area and at the end, a very luxurious bathroom with views of the mountain that surround the back of the property.

Construction
Concrete footings were cast once site prep was completed, then steel columns and beams were set in place to create the supporting framework for the containers to be craned and placed, and then welded in position.

The central hybrid floor area could then be constructed to tie the three 12-metre containers together. The large framework of the roof structure creates large overhangs to shelter the large area of glazing on the north side.

Once the full shell of the house was completed and sealed off, the remainder of the ceilings, flooring and fixtures, including cabinetry, could be fitted.

The great thing about building with containers is the offsite construction which in turn saves the client on time and labour. While the main house was being completed, the guest cottage was being finished off.

Finishes
We were lucky to have a client with impeccable taste, which included black and brass sanitaryware fixtures, stunning floor-to-ceiling Bianco marble tiling in the bathrooms, delicate light fixtures above the kitchen islands and a feature chandelier above the main house double volume staircase area.

The cabinetry is high gloss Folkestone grey which is contrasted with black linear boxed shelving and a simple Caesar stone cloudburst concrete countertop and glistening grey tiled splashbacks. The clients biggest wish was to expose as much of the containers as possible as they form an integral part of the envelope. Therefore, the exterior of the containers was not cladded and in the main living and dining space, the black painted container can also be seen.

Summerveld is located within the lush rolling hills...